Kafu > PS5 vs Xbox Series: Which one should you buy? 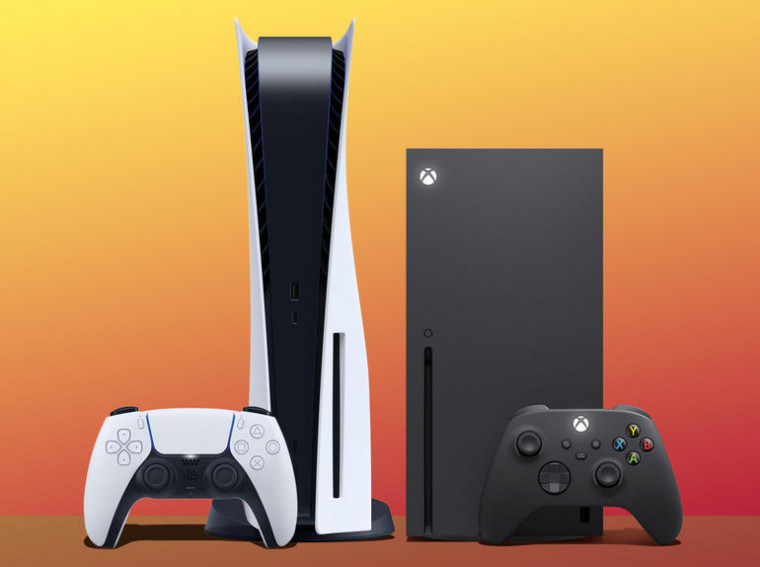 PS5 vs Xbox Series: Which one should you buy?

We all know how stressful it can be when given two choices in technology. At first, both may appear equally good, but you’ve gotta choose (unless you can afford both, in which case, please go ahead). The PS5 and Xbox Series X have finally arrived after long waiting. With their new and exclusive traits, they’re running out of the shelves soon, leaving you on the hot spot of deciding who’s the winner of the PS5 vs Xbox Series X debate. But fret not, we’ve got you covered. We’re here to discuss the major features and specs of both systems, and together, we’ll eventually work out an answer to this tricky dilemma.

Are you a loyal PlayStation fan unsure of whether to upgrade? Have a read at this!

The PS5 was released by Sony on 12th-19th November 2020 at a price tag of 1496.25 SAR for the Digital Edition and 1871.25 SAR for the Ultra HD Blu-ray Disc Drive. While Microsoft’s Xbox Series X appeared on the 10th of November 2021 at the same price range as PS5’s, with an affordable version called Xbox Series S. Both systems look very promising within the departments of power, speed, graphics, and even exclusive games such as Marvel’s Spider-Man Miles Morales and Halo Infinite.

A Walk Through Physical Traits and Specs

Design-wise, both systems couldn’t look any more different. With the PS5 being taller and twice as long, it contains a stabilizing piece for convenient placement. Xbox Series X is rather bulkier and is cuboid-shaped. Both devices are pretty quiet during operation, contain USB ports, Ethernet port, HDMI out, power port, and an expandable storage slot that’s exclusive to the Series X.

When it comes to the controller, the Series X hasn’t seen many additions, aside from a few tweaks here and there, along with a share button. Meanwhile, the PS5 shows off not only with an onboard mic and better battery life but with a whole new design, featuring the DualSense controller with its notable hallmark being the Haptic Feedback, which includes locational vibration and adaptive triggers.

The PS5 has added a new party system, an exclusive feature called Activity Cards that provides objective trackers and gameplay hints. The Series X UI is pretty much unchanged, which could be seen as a plus or minus depending on the player’s preference. With the games becoming more complex and taking a larger space, neither system has found its way around it. Although an expansion card of 1 terabyte storage could be bought for Series X, it’s considered a temporary solution.

Now it’s become clear that Sony and Microsoft can’t be any further apart in their business ideology for next-generation consoles. On one hand, you have the PS5, a traditional generational console, and one that would have its own exclusive games, which may drive you to purchase the PS5 solely to play your favorite game.

Yet Series X is baffling us with its platform subscription service “Game Pass Ultimate” stretching all over Xbox‘s hardware system and even PC, giving you library access to many impressive games, and ensuring day 1 access to Xbox’s titles when they premiere. Although Sony tried to combat that by adding “PS Plus Collection” that provides PS5’s owners with unlimited access to 20 of most classical game titles of PS4, it’s of no comparison to that of the Series’s X.

Provided with Game Pass Ultimate at no additional cost is Xbox’s Cloud Gaming, which gives you access to a selected title of games through an Andriod tablet or phone. Sony’s PS Now offers the same kind of game streaming (though with older legacy game titles) that’s available on PS5 but with a cost of 37.75 SAR a month.

It turns out backward compatible games are going to make the bulk of your library if you’re an early purchaser of either device. Yet both platforms do a good job at preserving last generation titles just the way you remember them, even making them perform impressively better.

Microsoft has turned curated backward compatibility into a feature bullet point known as “Smart Delivery”, to serve you the best possible version of the game regardless of where you play it. It also has added a new feature, “Quick Resume” allowing you to juggle multiple games at once, resuming the game back to where you left off, without additional loading time.

For a list of every platform’s game coming out in 2021, check this out!

PS5 vs Xbox Series: So what have you decided?

The PS5 and Xbox Series X are both fantastic devices (if only they had a buy one get the other for free policy). Similar in so many ways, yet differences such as the controller and game subscription can act as determining factors for buyers.

You can never go wrong with either device being powerful in hardware, containing exclusives, an SSD for light speed, backward compatibility, and are silent in operation which is something that can’t be said about previous generations.

The PS5 is massive in size and is yet to recognize a PCIe 4.0 NVMe SSD for storage expansion. The Series X is box-shaped, which tends to look awkward when placed horizontally, and it doesn’t have a neat controller like the PS5’s to make up for such downside. Something to consider is the first-party game content, which the PS5 has proven to be impressive at, yet the delay of Halo Infinite has hurt the Series’s X charm. But again that may not be a deal-breaker for you, so make sure to be aware of all the variables before making a purchase.

Do you know what would go perfectly with your brand new gaming console? Being part of the largest gaming community in MENA, and becoming champions at some of the biggest esports tournaments in the region. Join Kafu Games and be part of this exciting community.